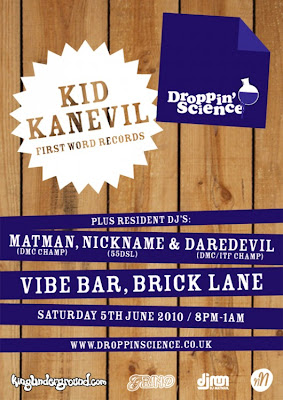 Droppin’ Science is back to rock the Vibe Bar on Saturday June 5th.

This time we’re joined on the turntables by First Word Record’s very own Kidkanevil.

A bit about KidKanevil… Hailing from Tokyorkshire, DJ/Producer Kidkanevil first came to prominence with the release of his critically acclaimed debut album ‘Problems & Solutions’ back in 2007, and has since gone from strength to strength.

Now three albums deep, his latest LP ‘Basho Basho’ was released earlier this year to great critical acclaim! Check it out over at: http://kidkanevil.bandcamp.com/

KidK is fresh from a stint at this year’s Red Bull Music Academy and ready to unleash a barrage of new music and collaborations on the world. His unique productions & club-quaking DJ sets show influence of hip hop, dubstep, jungle & more!

“By far one of the UK’s most original producers.” – Hip Hop Connection

“Thunderous…a vivid display of dexterous beat construction and cultural experimentation. An incredible amount of character bubbles at the surface of evey track.” – okayplayer

As always your Droppin’ Science heavyweight residents Matman, Nickname & Daredevil will also be on-hand to tear up the dance!