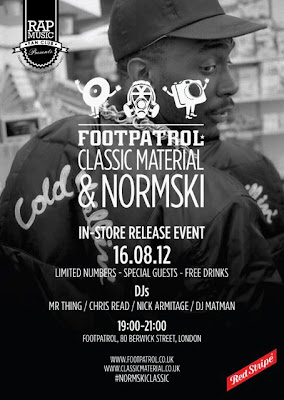 Next Thursday I have the honour of djing at the launch party for this dope T-shirt collaboration between Classic Material, Normski & Foot Patrol. Come down to snap up one of the limited edition tees, drink free beer & get down to the sounds of myself, Mr Thing, and Classic Material’s Chris Read & Nick Armitage (aka Nickname)!

Normski exploded onto the public stage in the early 90s as presenter of the groundbreaking BBC2 programmes ‘Def 2’ and ‘Dance Energy’, broadcasting the previously under-represented elements of the UK’s black music & dance music scenes to a new audience. For many years prior to this, Normski had been documenting UK club culture and the rise of hip hop culture in the UK through photography. As a key figure in the UK’s early hip hop community, Normski enjoyed unrivaled access to the rising stars of the home grown scene and high profile touring acts from the US. Utilising the iconic imagery of Normski’s photography dating from the mid to late 1980s, Footpatrol is pleased to present a collaboration with Normski and partners Classic Material, a London based collective of music makers, designers and photographers. The collaboration takes the form of six limited edition t-shirts featurng five of Normski’s most iconic photographs featuring images of artists Big Daddy Kane, MC Lyte, Kool Moe Dee, Public Enemy’s Flavor Flav and the UK’s Demon Boyz. A sixth t-shirt bearing the Classic Material logo completes the collection. 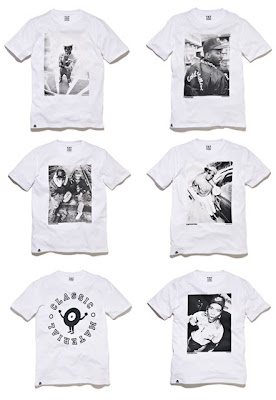